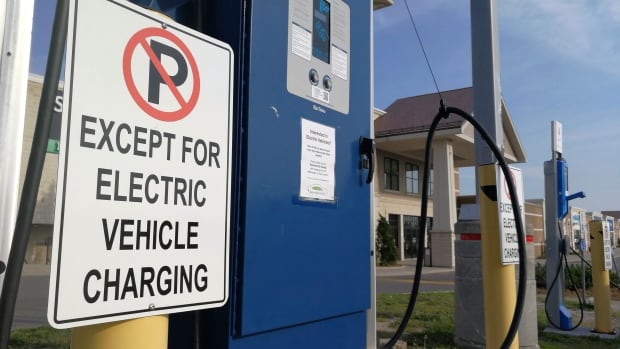 Sean Hart was getting the windshield repaired on his car when the mechanic asked him the question he gets on a regular basis.

“Where do you charge it? That’s the first thing,” said Hart, vice-president of the Electric Vehicle Society and owner of a Nissan Leaf.

The answer to that question is expected to grow by more than 100 different locations in Windsor-Essex after a recent federal grant program approved applications faster than expected.

“We’ve had a great response from the community. We’re actually fully allocated,” said Eric Freeze of the Essex Energy Corporation.

When the program launched in December they anticipated it could take two years to empty the program’s budget.

“The fact that this was done within five months, that was faster than we had anticipated.”

He expects to see those stations online by the end of summer.

The city of Windsor has also installed an additional 22 charging ports and expects those to be online by summer.

EVs can be charged using the same outlet you plug your toaster in, giving a vehicle seven to nine kilometres worth of range per hour of charge time.

That’s what’s known as a Level 1 car charger, which usually comes with the vehicle.

Level 2 chargers use outlets similar to what a home needs for a stove. They can charge an EV four times faster than a Level 1 set up, outputting between 3.3kW to 19.2kW.

The Charge Up Windsor Essex program expects to see 105 Level 2 chargers installed through the program.

It also approved 30 applications for fast chargers, or a Level 3 charger.

Hart compares the Level 3 chargers to a gas station.

“The normal guidance is a half an hour for an 80 per cent charge from nothing,” he said.

It would cost him about $9 to fully charge his Leaf, much cheaper than the cost of filling up a vehicle with gas as prices hover around $1.80 per litre in Windsor.

How do you get one at home?

After Hart explains to people where they can publicly charge an EV, he can usually guess the next question.

“What do I need to do to get a charger installed at home?”

He lets them know that people can plug their car into any outlet they have at home and top off the charge overnight, usually enough for a person with a short daily commute.

A Level 2 charger can do a full re-charge for most EVs in a matter of hours and can be a routine installation for most certified electricians.

Rob Hoffmann of Advanced Electric and Controls Inc. explains what goes into a home set up for charging an electric vehicle. 0:53

“We had done a few EVs early on, didn’t really see too much traction with that,” said Hoffmann, who now gets a call two or three times a week for an EV job.

They’re also the people Tesla recommends their vehicle owners use to install stations, the only ones listed on the EV car maker’s website in the region.

“The first thing that we would do is schedule a quote so we can come out and see the site and assess exactly what you’re working with.”

Hoffmann said most new build homes are in a good position to install a Level 2 charger with minimal work, potentially costing a couple hundred dollars.

But the price can go well into the thousands of dollars if it involves ripping up drywall or doing trench work to access a home breaker panel.

“The timeline can change quite a bit and so could the price accordingly.”

He said the one thing people should make sure of is that the work is completed by someone that is authorized with the Electrical Safety Authority.

It allows the contractor to open a permit for the home and holds them responsible for the work completed.