Data in the Santa Clara High Technology Journal shows that nChain is in a prime position to profit from its patent portfolio.

The article cites nChain as one of the top five companies that hold the most blockchain-related patents. It explores five trends taking place around patents related to fintech and digital currency that point to the conclusion that patents have an overall positive effect that encourages innovation in each industry.

“I decided to research this topic given my personal interest in blockchain technologies and the many evolving legal issues that I was seeing in connection with my IP law practice,” Katopis said.

“While some may point to some issues or flaws in the system, the lessons of history are quite compelling, I am a believer in the U.S. patent system. It was enshrined in the U.S. Constitution. We have been the beneficiary of the best patent system in the world for 230+ years,” he added.

According to Katopis’s research, patents do encourage innovation in the fintech and digital currency industry, and data shows that tech giants, investors, banks, and startups are increasing the amount of time, money, and resources they are spending to obtain blockchain-related patents year-over-year.

“The article explains the many reasons why companies seek patents on blockchain technologies for either securing R&D investment or defensive legal purposes,” Katopis explained.

However, the article notes that patents in the fintech and digital currency industry are a bit of a chicken and egg dilemma. The research says that “a vast amount of literature argues that historically patents have long secured valuable rights around innovation and in turn, are a lagging economic indicator of incentivized private investment,” which makes it difficult to pinpoint whether it’s the patents that are leading to innovation, or if a growing number of patents and patent applications around a specific industry are an indicator that innovation is taking place within a sector. 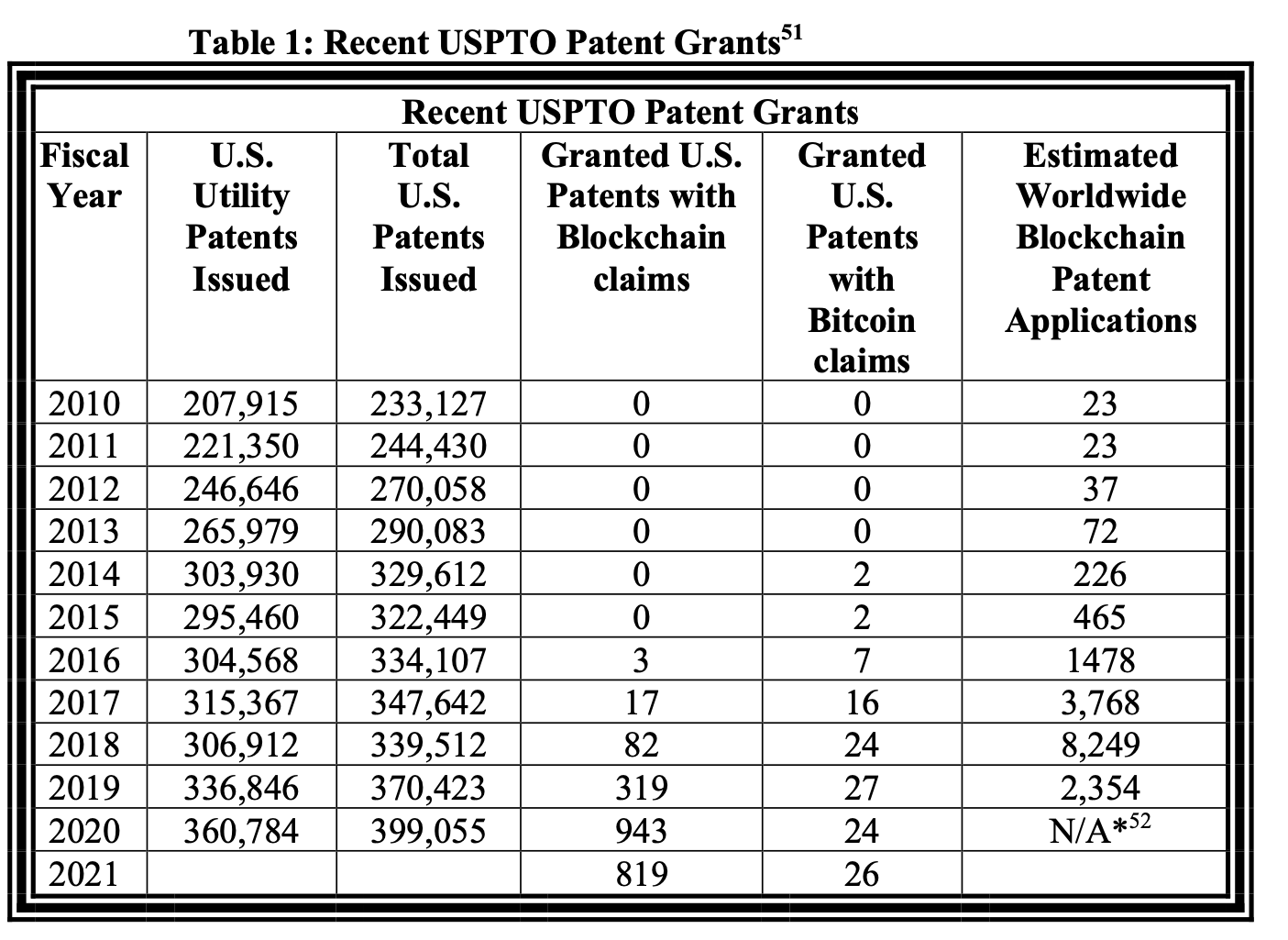 Where do patents get their value?

Although the research and enterprise behavior supports the conclusion that patents encourage innovation and have an overall positive effect, the objective value of many of these fintech and blockchain patents and patent strategies has yet to be seen or defined. The article calls this problem the patent paradox; filing patterns and enterprise behavior indicate patents are essential and valuable. However, where is this value evident? Most patents generate revenue and prove their value when they are licensed or litigated, but the article says that:

“Legal scholars argue that this enormous number of patents is simply irrational because more than 99.9% of patents will never be licensed or litigated.”

To learn more about how patents are valued, we spoke with nChain CFO Andy Moody.

“Normally, in a patent portfolio, you will have a lot of patents—not all are equal—and what you find is that you have a unicorn idea in one of them. You only really need a few of those to be very successful, but you are not entirely sure which one it will be,” said Moody.

“What’s more important than the patent itself, is demonstrating the value of the patent. Something that nChain is doing at the moment is taking some of our patents and building prototypes around them to demonstrate value, and that’s what will be most interesting to entrepreneurs and the outside world, they can connect their ideas with the demonstration of value from the patent,” he added.

A good example Moody gave revolved around Pfizer and the pharmaceutical industry.

“Before COVID, a Pfizer of the world probably had some research on vaccinations, that would have been part of their patent portfolio, but until COVID-19 came, it was probably less valuable. Then suddenly, an event took place (COVID) that allowed them to put the research into developing a vaccination and they could sell it and make billions almost overnight,” Moody remarked.

Patents primarily prove their worth when licensed, litigated, or used to create tangible goods and services. Moody believes we are approaching the era where nChain’s patents will bear fruit, but as Moody told us, it is difficult to pin down the true value of a patent until it leads to the creation of goods and services in the world.

On the licensing and litigation front, the article argues that “some patents are simply litigated later in their lifetime (again, many of these patents were only granted in the past five years). Further, any such patent cases may have merely been settled by the parties outside the dispute forums. The settlement terms may have included economic damages and/or the cross-licensing of technologies among parties.”

Katopis added to that by telling CoinGeek that “often, patents are litigated later in their term when there is more of a record about any infringing uses,”

Explaining why we haven’t seen any significant movements around blockchain-based patents being licensed or litigated.

When will blockchain patents be used?

As the blockchain and digital asset spaces continue to mature, it becomes more likely that we will see patents related to these emerging technologies get licensed and litigated. Andy Moody from nChain believes that we are only a few years away from seeing goods and services that were created by way of blockchain-related patents.

The fact that enterprises are ramping up their efforts to obtain blockchain-related patents shows that there is value in the industry and indicates that innovation is taking place. That being said, the companies with the most extensive patent portfolio are in the best position to capitalize on the action that is expected to unfold in these industries over the next decade.

Learn more about Bitcoin investments with this new ebook, Investing in Blockchain: Better data for a better world.